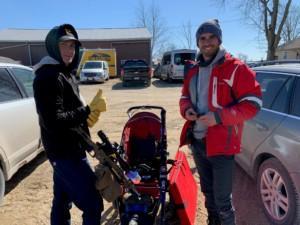 Visitor blog: How the advantages of .22 Rimfire training translate to centerfire match performance

We are a family of shooting people. I have three sons and a daughter who all like to shoot, but two boys who are particularly serious about it.

When my sons and I first started on the journey toward learning how to shoot long range, we started out with centerfire rifles. With guns like the Tikka T3x Tac A1 chambered in .260 Remington, shooting 136 gr Lapua Scenar L’s; Custom Defiance 6 Creed with a  26” Krieger barrel shooting 105 Berger Hybrid Targets, all with amazing ballistic performance. After load development we were achieving quarter inch groups at 100 yards. We were engaging targets out to 1000 yards with relative ease under light winds from a prone position.

We were basically lacking everything else like reading wind, managing the pressures of competition, and how to efficiently run the Kestrel. We were starting from scratch with PRS, NRL style positional shooting. Another problem was that we only had one chance each year to compete with centerfire in our province in Canada. There was also the issue of high cost of equipment, ammo and entry fees for the three of us.

Then in April of 2018, Rick Katigbak from Montreal decided to hold a .22 rimfire PRS style match in Owen Sound, Ontario. It started to really catch on and quickly spread all the way across Canada. There are now competitions in every province east of Quebec all the way to Vancouver Island.

When the .22 PRS matches first started, my friend told me about it and tried to get me involved. I wasn’t interested, because I thought the humble .22 wasn’t much good past 50 yards, and what could I learn that I didn’t already know?
After all, I had been using 22’s all my whole life and thought that I had them figured out. Boy was I Wrong. I really didn’t realize what I could learn from this type of competition called Canadian Rimfire Precision Series, CRPS for short. Well, as it turns out it offers everything I needed. All the skills we lacked could be strengthened in this environment. It ticked all the boxes.

Now, I have to admit that when I was getting set up for my first match I had a hard time trying to figure out the unpublished BC‘s of my favorite 22 ammo. It started with simple guess work to find the right ballistic curve to match impacts with my Kestrel and it wasn’t easy. Shimming scopes to get every last bit of elevation that I could squeeze out of a 30mm tube, and seeing 12 inch groups at 200 yards were pretty discouraging. I thought, this is impossible, why am I bothering?

One thing that I underestimated was how people will rise to great heights if presented with a challenge and necessity is the mother of invention. I realized that it was going to be a big challenge for everybody, so I thought, let’s just do it. We had competed in two Meaford Long Range Steel Challenges before we competed in our first CRPS competition at East Elgin. It was great to only pay a $50 entry fee because everything I did was multiplied by 3, 4, or 5, depending on how many of my kids wanted to compete.

Also ammo costs were drastically reduced with 22LR. One thing we realize when going from centerfire to .22 is that everything to do with ballistics gets a whole lot more complicated. Shooting 380 yards with the best purpose built .22 ammo like SK Long Range Match takes 19.7 mils of elevation. A 6 creed going the same distance only takes 1.19 mils. That’s 16 times more elevation and 16 times more difficulty. If you were to dial a 6 creed to 19.7 mils, that would get you out to 1672 yards – that’s only 88 yards shy of a mile. That’s pretty crazy when you stop and think about it. So when you go to a match where 70 % of the competitors are making first rounds hits on a 3 minute target at 380 yds in 10 mph cross winds with a .22 rimfire, you realize how high the skill level of the competitors has risen to.

These people are doing what would have been considered impossible a few years ago. I have noticed that my positional stability has improved significantly compared to a few years ago, and I am learning to deal with the stress of competition in a much better way. People like me that have been hooked by real long range centerfire thrill are using this .22 rimfire platform to hone their skills for the big leagues.

I know my way around the Kestrel 5700 elite and now the Kestrel HUD pretty well, not perfect, but getting better every day. My family now has the opportunity to compete in 5 to 8 .22 style matches per year, so I am pretty sure that when this group of guys and gals get a chance to compete in centerfire matches, they will be a force to be reckoned with. We all know that it’s so fun and challenging that many shooters may never feel the need to go to fullbore matches.

I have noticed that when I shoot my 6 BR now that it is so easy. I am now so convinced that all of these .22 matches that we have been competing in are having an incredible effect on the skill level of the Canadian sport shooting community. Let’s pray that the big centerfire matches and the US-Canadian border open up so that we go to the big matches and prove how far we’ve come.

About the author
Ron Sharpe is a father of four and a competitive PRS shooter from Ontario, Canada. He is ranked 7th in the Canadian Rimfire Precision Series 2020. He is also the shooting coach for 2020 Canadian series points’ leader Brett Sharpe and up and coming talent Sam Sharpe.